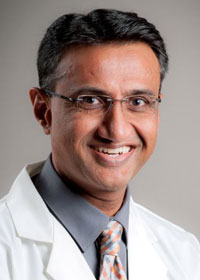 Dr. Ketan Goswami received his medical degree from the SMT. N.H.L. Municipal Medical College in Ahmedabad, India in 1992. Shortly thereafter, he came to the United States where he completed his residency in Internal Medicine at Wayne State University in Michigan. Dr. Goswami completed his fellowship in Endocrinology, Diabetes, and Metabolism in Springfield, IL at Southern Illinois University. In 2005, he accepted our offer to join the practice and he became our sixth physician.

Dr. Goswami is married. He spends the majority of his free time in the company of his family.